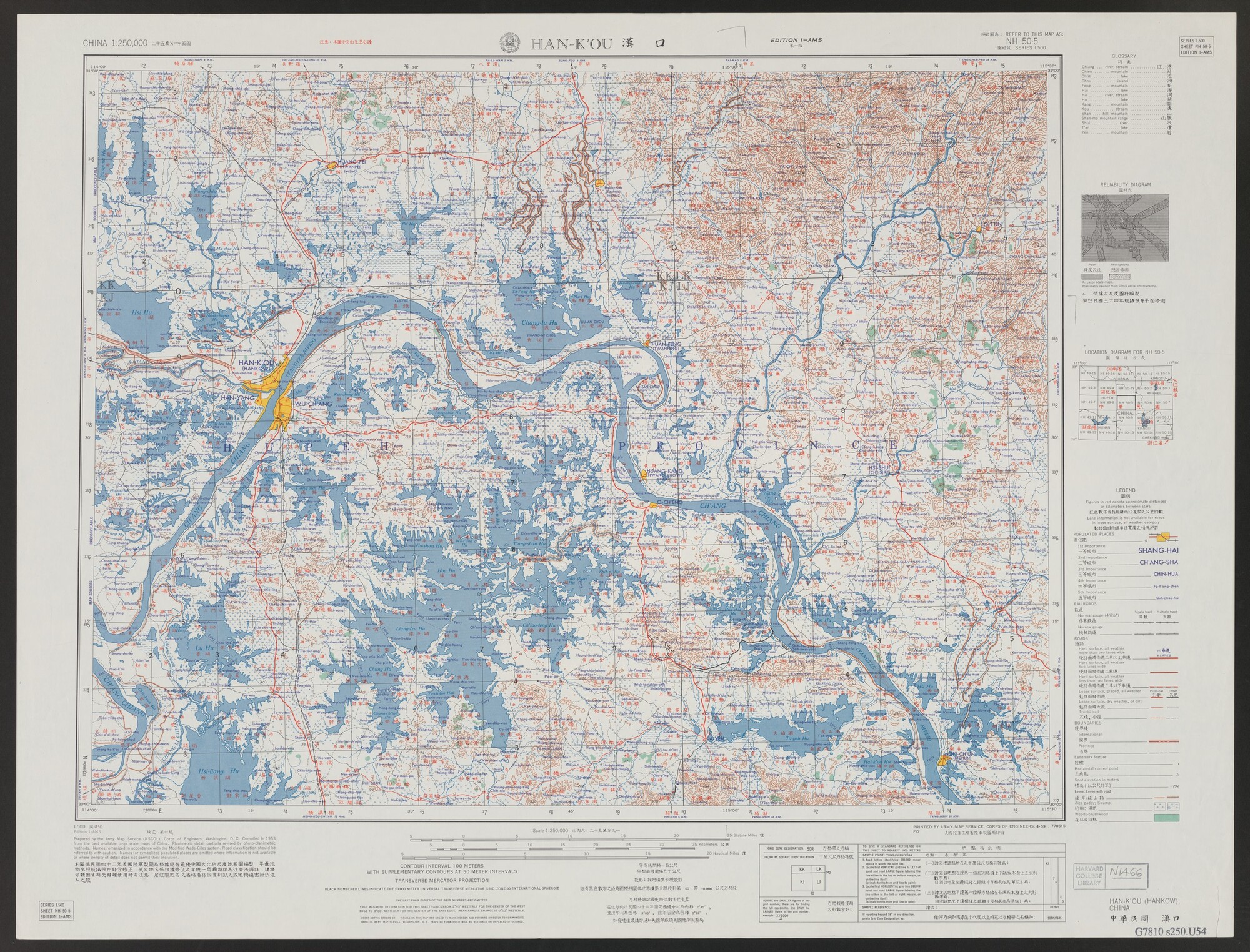 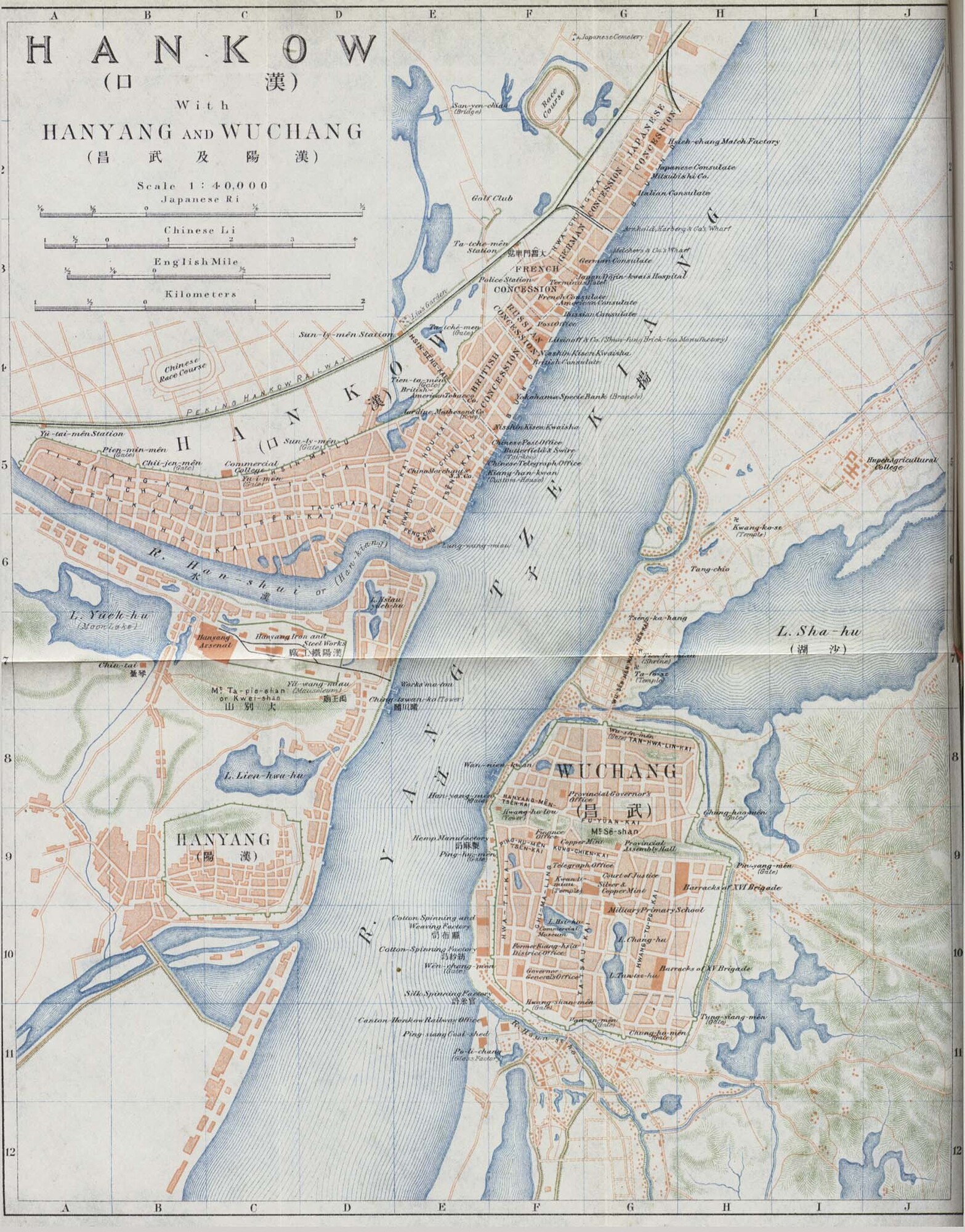 This map of the tri-city area of Hankow, Wuchang, and Hanyang was published in 1915 by the compilers of An Official Guide to East Asia, Volume IV by the Imperial Japanese Government Railways[1]. This map serves a translational function. A scale is included for Japanese, Chinese, English, and metric measurements. The cities, rivers, and lakes are given names in multiple languages; several of the buildings are also named in multiple languages. While it was published in Tokyo and many of the smaller labels are in English, it appears that the map could be functional for multiple groups of people. The use of a letter and number grid system indicates that the map could be used to gain a sense of the general location of certain buildings or places. For example, the Hanyang Arsenal is in block C7, while the Japanese Concession is in G2; this allows for a sense of relational distance. In the Hankow section, each building on the bund is listed along with major street names. Each concession is clearly labeled and delineated by light dashed lines. Although less heavily labeled, Wuchang’s streets and a few key buildings are also marked. Key buildings, such as colleges and factories, are marked by a darker shade of pink throughout the map.

A key element of this map is color and line-work. The cities are marked by filled in pink shapes, the water by blue radiating lines, hills by green hatches, city walls by green lines with consistent perpendicular marks, and railroads by black lines. There is an emphasis on water: the blue is the largest block of color; not only is the major river named but many of the lakes and tributaries are named; and careful attention is given to details of shore lines. City borders are second most prominent division, after the division of land and water. Hankow appears neat and order. While the foreign concessions are outside the original city wall, their borders follow line of this city wall, and the railroad and edge of the city is roughly parallel to the shoreline of the river meeting the city. This neat, contained, and ordered shape of Hankow is further emphasized by the placement of the text “Hankow” which also follows on the same parallel line as the rail line and edge of the city. Lastly, the foreign concessions appear to be set up in a grid system, and even the Chinese section despite curving roads appears also to be in a rough grid system. Hanyang and Wuchang appear slightly less ordered, although both are contained in a city wall like Hankow. Both Wuchang and Hanyang run up to the hills, marked by green hatches, some of these green hills coming into the city itself. The use of pink and the way in which sections are marked in each of the cities tends to flatten the city; some streets may be hilly but one would not know from this map. The shape of the land is indicated by the hills marked on the edge of the map, and the shorelines of lakes and rivers.

In conclusion, the map appears to represent a sort of finished project, a successful treaty port. The layout of the cities, especially Hankow, appears neat and ordered. There is not only evidence of a lot of business and industry, but of culture and entertainment as indicated by the labeling of the race track, golf club, colleges, temples, and cemeteries. It appears to be a welcoming area, one that is navigable due to the clear separation of the three cities by the water, the grid or near-grid system in Hankow, and the helpful letter and number gridding on this map. This represents a sense of accomplishment – a sort of finished product of a successful treaty port – highlights business and industry, neat controlled, no harsh lines by ethnicity, detailed (dense in a nice way). Lastly the use of multiple languages on this map, not only helps multiple groups of people use it, but implies that multilingualism and translations are present in the cities themselves.